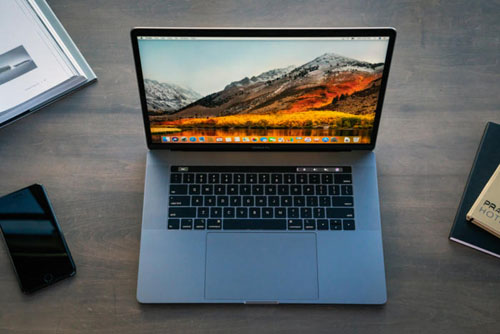 Love MacBook Pros but loathe Apple’s rather astronomical retail prices? Today’s your lucky day. Head over to B&H Photo and you’ll find that the retailer is slashing hundreds of dollars off the prices of various models of the 2017 MacBook Pro. In the most extreme case, you can knock off as much as $900.

As you might expect, the price drops aren’t quite so extreme for the entry-level models, but they’re still impressive. Consider these two 13-inch MacBook Pros, which you can pick up for $200 off the listed price.

Want a bigger screen and more power? You’ll be happy to know you can also pick up some comparatively affordable MacBook Pros for impressive discounts. Here are a couple of our favorites.

The biggest price drops, though, affect the models with 1TB or more or storage. That’s a lot of room, and frankly I don’t think many of us need it. But $600 to $900 off is a great deal if you do a lot of work in video, play a lot of games, or simply use your MacBook Pro for everything.

Budget PC builders are in for a treat: It’s been officially confirmed that you can now heavily overclock Intel’s cheap Skylake chips with a BIOS update.
Tech site TechSpot confirmed it through hands-on tests. The team overclocked a Skylake Core i3-6100 from its default clockspeed of 3.7GHz to 4.7GHz, after motherboard maker Asrock provided them with a beta BIOS that required switching off the integrated graphics.
Why this matters: Intel’s last few generation of chips have limited overclocking to pricier “K”-series CPUs. With an apparent workaround discovered, higher clock speeds and essentially “free performance” may become far more attainable for those who can’t afford a K chip. 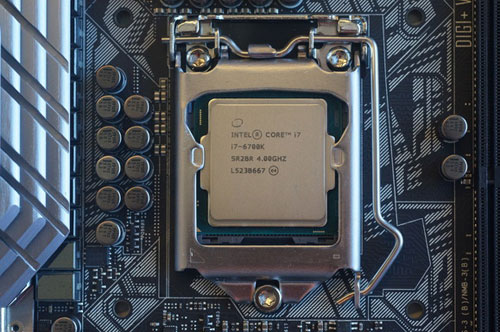 An overview of overclocking

“Overclocking” is the term for running a CPU’s clockspeed above its rating from the factory. This may sound dangerous—and it can be if done improperly—but many CPUs are artificially limited to lower speeds by Intel at the factory to help meet prices.
Here’s a car analogy: It’s like if Ford sold a top-end Mustang that could hit 150 miles per hour, but then took the same car and set its computer to limit the top speed to 120mph. In this case, Intel’s cheapest “K” Skylake chip is the $242 Core i5-6600K with a factory clock speed of 3.5GHz. The same chip has an equivalent Core i5-6500 for $192 at 3.2GHz. If you could take that cheaper CPU and overclock it to the same speed, why buy the pricier part?
An architecture change within the sixth-generation chip that separates the chip’s “BCLK” (“base clock”) from other components appears to be the culprit behind the newly enabled overclocking. The base clock is one of the internal clocks that regulates the overall megahertz of the chip. With Haswell or Ivy Bridge, for example, the base clock was hooked up to other sections of the CPU, causing instability when the base clock was increased even in small amounts. That’s no longer the case, and after months of speculation over whether or not base clock overclocking could work, we now know it could.

Something to note: TechSpot’s overclocking confirmation was achieved only with the dual-core Core i3 chip. Anandtech’s attempt at performing a base clock overclock of a quad-core Core i5-6500 hit a wall well before TechSpot’s dual-core would. But it isn’t known whether that’s because of the motherboard Anandtech used or because board vendors are still tweaking their BIOSes to enable the overclocking.

PCWorld reached out to officials at Intel for comment, but we’ve had no response as of Friday afternoon. However, since the launch of Skylake, Intel has maintained that design changes would make the new chip overclocking-friendly. What’s not clear is whether Intel intended to make the non-premium K-chips overclockable, too.
As mainstream desktop PC sales continue to decline, Intel has increasingly relied on sales to enthusiasts and gamers, who have no problem paying a premium for overclocking-friendly chips. If a groundswell of PC builders suddenly reached for the cheaper, overclock-ready chips to save a few bucks, that could impact sales of Intel’s premium K-chips.
This wouldn’t be the first time Intel had to squash such a trend. Intel’s chipset for its Haswell series included the Z-series for overclockers alongside the cheaper H- and B-series chipsets. When motherboard vendors discovered a way to enable overclocking on the lower-cost H- and B-series, Intel stopped them by updating the microcode on its CPUs, forcing buyers to move back to the higher-margin motherboards with the Z-series chipset.
It’s just as likely that Intel could look the other way. The company has truly been friendlier to overclocking. It has sponsored extreme overclocking contests using liquid nitrogen and liquid helium, and even threw a bone to budget builders with its $72 Pentium G3258 “anniversary edition” in 2014 that was ready for overclocking.

Microsoft will let you keep your free 15GB of OneDrive storage, if you claim it

Microsoft has grudgingly agreed to let current OneDrive users keep their 15GB of free cloud storage and 15GB of free Camera Roll “bonus” storage, rather than dropping you to 5GB as previously stated, but only if you’re aware of the offer and don’t mind a bit of spam.

To take advantage of the offer, visit this Microsoft page. Microsoft representatives said the company does not have a supplementary explanatory blog post or statement to add at the present, but they did supply the webpage address, whose URL lists it as a  “preview” at the moment.
You’ve already navigated the first hurdle: since users have to manually opt in to the offer, OneDrive users who are unaware of the deal won’t be able to take advantage of it. And there’s a small catch: by selecting the offer, you agree “to receive promotional emails from OneDrive,” although Microsoft immediately says that you can unsubscribe as well—how to do that, however, isn’t exactly clear.
It appears that unchecking the “promotional email” box, then clicking the “Keep your free storage” button also appears to work. In response to a question from PCWorld, a Microsoft representative said that the wording is being changed to “make it more clear”.
Why this matters: Microsoft’s reputation has climbed of late, as it’s reached out and worked with customers on the development of Windows 10, Office, and even Solitaire. But the end of unlimited OneDrive storage was a real black eye for Microsoft’s outreach efforts, and even the latest offer feels a bit half-hearted. If you want your friends to be able to take advantage of the offer, you’ll need to share it with them.

Over 60,000 different users complained about Microsoft’s changes to its OneDrive policy, which also reneged on an earlier deal to supply Office 365 subscribers with unlimited OneDrive storage at a future date. But what users were really unhappy with was Microsoft’s decision to also reduce the amount of free storage from 15GB to 5GB per account, as well as discontinuing the 15GB camera roll storage bonus for mobile users who uploaded their mobile photos to OneDrive. Microsoft’s new offer reverses the latter decision.
Microsoft has apparently maintained the 1TB limit on user accounts, however. In November, Microsoft also said that it is also doing away with the 100GB and 200GB OneDrive paid plans priced at $1.99 and $3.99 per month respectively. Instead, it will roll out 50GB of storage for $1.99 per month in early 2016. Anyone needing more storage than that can get 1TB by signing up for Office 365 Personal for $6.99 per month.

Yahoo’s new iOS app will have viewers spending less time searching through streaming apps to find something to watch, and more time actually watching.
The Yahoo Video Guide app is a one-stop-shop for finding movies and TV shows that are streaming on over 30 services. With Yahoo Video Guide, you can search for movies and TV shows to stream on Netflix, Hulu, HBO, Amazon Instant Video, Showtime, YouTube, Xfinity and other channel apps, as well as rent or purchase movies and TV episodes from services like iTunes, Amazon, and the Google Play Store. If you have the streaming app installed, the Yahoo Video Guide will open it to the specific app movie or episode. If not, it will redirect you to download it from the App Store. 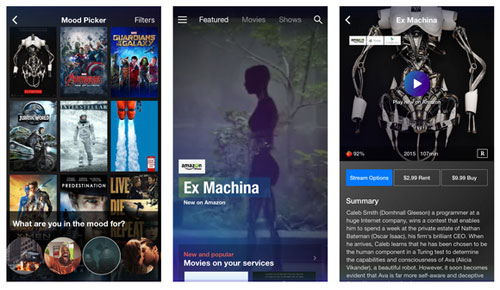 For iOS users with multiple streaming subscriptions, Yahoo Video Guide is the ultimate timesaver. It took less than 30 seconds to discover that the first Hobbit film is available to stream on the TBS app, that we can rent the sequel on Amazon or iTunes, and that the third and final installment is currently streaming on HBO Go. We just had to search for “Hobbit” once, instead of conducting that same search back-and-forth on different apps.
The impact on you: Yahoo Video Guide is very similar to Can I Stream It? but Yahoo’s version is all free. There are mobile banners on the free version of Can I Stream It?, and you have to pay $1.99 for the Pro version that lets you search through just the services you subscribe to. Being able to search through your services is actually a key feature in Yahoo Video Guide. The app creates a personalized guide by finding the streaming apps that you’ve installed on your iPhone. You also have the option to add more services, just in case you have a subscription but for some reason haven’t installed the iOS app.
In order to inject some delight into searching for something to watch, Yahoo Video Guide also incorporates a “MoodPicker.” Using different GIFs you can filter out movies and TV shows by whether they are “Romantic” or “Tense.” This feature is a little funky still, however, because we don’t really see how movies like Birdman or American Beauty can be considered “lighthearted.”

Details were sparse, but the company’s said before it wants to expand its hidden services. 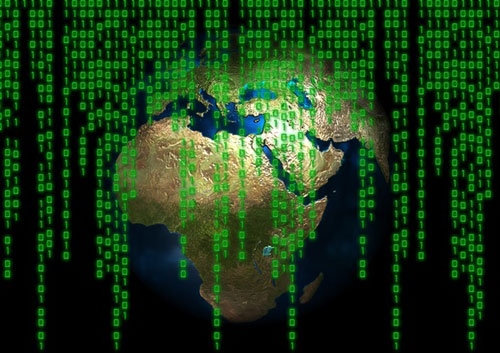 Even online anonymity and privacy need a crowd of sorts–crowdfunders, to be specific. The Tor Project recently kicked off a crowdfunding drive, using journalist and filmmaker Laura Poitras as an example of the importance of the online anonymity tools.
In a blog post announcing the funding drive, Tor quotes Poitras saying that she never could have worked on and help break the Snowden story without Tor. Poitras worked with Glenn Greenwald on the initial revelations from documents leaked by former NSA contractor Edward Snowden. She also directed the Snowden documentary Citizenfour. “Tor is an essential tool that…fosters free speech and independent voices,” she said.
Tor’s blog post on Tuesday didn’t have much in the way of specifics about the new crowdfunding drive or what motivated it. The Tor Project did not respond to a request for comment in time for this story.
Nevertheless, the group did say in March that it wanted to gather more funds from individuals to help make Tor hidden services more widely available. Basically, the group wants to make hidden services easier to use, more secure, and increase the user base for hidden services. “Anything you can build on the Internet, you can build on hidden services,” the non-profit group said in March. “But they’re better…anonymity is built in.”
Hidden services allow users to connect to online products and services such as websites, blogs, forums, and chat clients. The big difference, however, is that the user and the site they are connecting to don’t have to give up identifying information, allowing for a higher degree of anonymity.