Remember when a scroll wheel was a big deal? Or when optical sensors replaced scuzzy old mouse balls? And then, in the mid-90s, the unthinkable — a cordless mouse! Surely desktop pointing technology had reached its zenith.
Not so fast. You see, “cordless” and “hardcore gaming” just didn’t mix. Serious gamers prefer a six-foot hardwired tail to the slower response times and battery hassles of the radio-controlled variety. And what about those games that use the entire keyboard? Wouldn’t it be great if someone invented a mouse that would simplify the duties of the left (keyboard) hand? A mouse geared for one of gaming’s brightest stars – the command-crazed world of the MMO?
Enter Razer’s Naga. Debuting in 2009 and refreshed just this year, the Naga has more buttons than a 14-year-old chocolate addict has zits. It was — and is — a spectacular concept and a marvelous bit of engineering that’s found a ton of fans. But it found a few detractors, too.
At Logitech, the Naga clearly did not go unnoticed. The company’s new G600 MMO Gaming Mouse replicates much of what made the Naga special — including a plethora of thumb buttons, arranged keypad-style in four rows of three. Then it adds even more enticements to capture the imagination of those who treat their MMOs as gospel.

Features
The G600 features no less than 20 physical buttons — a panel of 12 on its left side, accessed by your thumb; three built into the “tilt” scroll wheel; two more mini-buttons on the very top; and three elongated keys (standard left and right mouse keys and a third “G-shift” key on the far right, directly under your ring finger).
It’s that “G-shift” key that gives the G600 something special. By clicking it, you initiate a shifted state for all 12 of those thumb buttons, effectively doubling their capacity. That’s a (very) grand total of 24 keystrokes available through the 12-button left-side keypad alone. Stunning. All those buttons make the G600 a formidable command center indeed, freeing up the left hand for character movement and the like.

There are two ways to configure the G600 for the games you play. Undoubtedly the slickest is via the on-board memory function, through which you can store three complete, unique profiles inside the mouse itself. Indeed, the G600 ships with three preset profiles (two MMO and one suited to general gaming). You can just plug in the USB cable and start living vicariously — no programming or additional hassles required.
By using the on-board profiles, you can feel right at home no matter where you play — a friend’s house, LAN party, the Playboy mansion. Every command remains where it should be.
To see which profile is currently selected, you simply glance at the keypad: It glows in all the colors of the rainbow, and you can assign specific shades to different profiles. You can even get fancy and instruct the lights to cycle or pulse at a given speed. A tiny LED display spelling out in plain English the name of your current profile would have been even cooler, but c’est la vie.
Performance
In action, the G600 proves itself as capable as we’d expect given the stature and track record of its manufacturer. The button array on the left is particularly interesting, shaped so you can generally feel your way around without taking your eyes from the screen. We found ourselves struggling to comfortably reach the back row of buttons, turning our thumb into a pretzel in the process. We do, however, appreciate that Logitech has infused just enough tension into all 12 keypad buttons that you’ll rarely, if ever, accidentally trigger any of them.
Otherwise, the G600 is a “palm grip” rather than “claw grip” mouse, an approach that suits the unique world of MMOs rather well. The G600’s anti-friction pads let it slip and slide equally proficiently on mouse pads and tabletops. DPI options stretching from 200 to 8,200 let you dial in sensitivity to a tee, and you can switch them on the fly.
Yet the G600 is not without its issues. It isn’t, for example, available in a left-handed variant. Whoops, there goes 10 percent of the population. It features a braided rather than plastic-coated cord — a decision that will be applauded by some but will bug those who feel braided cables are stiffer and more prone to fraying. For the record, we feel this braided cable is comparatively soft. Durability, of course, cannot yet be measured. 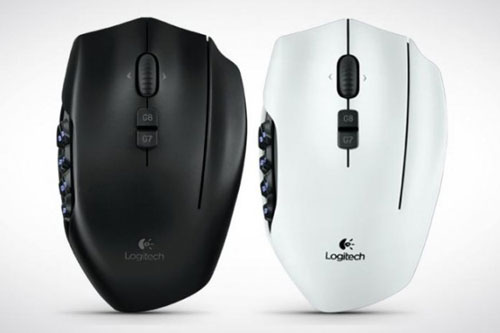 But the big question will undoubtedly be its functionality and usefulness outside the MMO world. And for that, the G600 both impresses and disappoints.
We auditioned it with Adobe’s Lightroom, a pro-level photo-editing application that’s second only to Adobe’s Photoshop for multiple-keystroke shortcuts. We toggled up the Gaming Software utility, entered a new profile, directed the application to the executable (mandatory for all new profiles), and began assigning. In no time at all we’d created a shortcut for full screen view (Ctrl+Shift+F) and assigned it to Button G11 on the mouse. Now, every time we fire up Lightroom, a glorious full-screen perspective is but a single click away. Very nice. We also instructed the pointer to move a little faster within the program than outside it. No problem for the G600.
Unfortunately, it isn’t an ideal all-purpose device. Indeed, it’s far from the best alternative even for action gaming. The big problem? It’s clunky. Compared to Logitech’s G9 Laser Mouse, for instance, the substantially more bulbous G600 is difficult to lift, even momentarily, from the desktop. The keypad makes it feel mushy, and there’s no real finger grip, while Logitech’s still-nifty G9 sports a lovely thumb indent on the left side and better weight balancing.
In fairness, Logitech specifically labels the G600 an MMO mouse. Still, when you’re dropping this much coin ($80 MSRP), you can’t help but hold out hope.
Conclusion
Ultimately, the Logitech G600 MMO Gaming Mouse makes sense only for MMO players, and even then only for those right-handers so deeply obsessed they’ll dole out this much money to gain a small competitive edge. There are other programmable mice out there, many of which won’t bust your pocketbook and aren’t as limiting. So, just how addicted are you?
Highs