Acer V5 review: Sexy-looking V5-552G-X414 is only a competent performer

If you need a notebook with a large display, Acer’s V5 is a well-priced solution. Just don’t expect knock-your-socks-off performance.
The Acer V5-552G-X414 is an all-purpose laptop that looks nice, boots fast, and delivers more than enough everyday performance for the average user. It renders movies smoothly on its 15.6-inch, 1366-by-768-pixel display, and it plays a good game up to a resolution of 1024 by 768. The keyboard is better than average, but the touchpad isn’t a favorite.
The Acer V5 weighs 4.41 pounds—just over 5 pounds when you add its AC adapter—and is handsome in a minimalist fashion. Our test unit appeared entirely in slate gray except for the black keys on its short-throw keyboard—one of the better keyboards I’ve tried (if not quite up to Lenovo or recent Dell quality).
The one-piece rocker-style touchpad, on the other hand, while nicely responsive to movement and taps, bends far too much before registering clicks. It feels odd and sours the overall ergonomic experience. Also, where many laptops provide access panels for the memory and storage, the V5 does not. This makes upgrading a sticky wicket for the average user.
The $630 configuration Acer sent is built around an AMD A10-5757M CPU, with integrated HD 8750M graphics. Throw in 6GB of memory and a 5400-rpm, 750GB hard drive, and you have a notebook that scored a pedestrian 124 on PCWorld’s Notebook WorldBench 8.1 test suite. Subjectively the unit feels snappy enough while on AC power, but less so when it’s trying to preserve battery life. Most of our test games, however, were playable at 1024 by 768 resolution, which isn’t something we can say about all laptops in this class.
Booting up is quick (about 18.5 seconds), 1080p video renders smoothly, and the sound through the speakers is better than average. Battery life on the PCWorld rundown tests proved to be a decent 4 hours, 13 minutes. Not stellar, but workable. 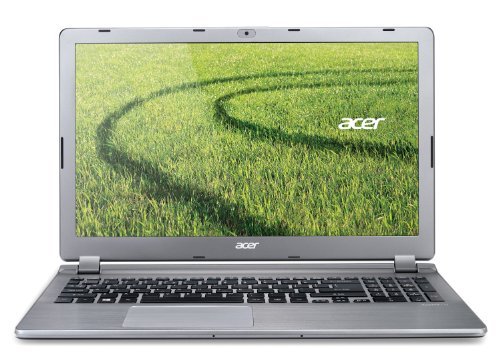 The V5 has all the ports and connectivity options the average user is likely to need. On the right side are the headset jack, SD card slot, and a single USB 2.0 port. The left has only a single USB 2.0 port and the power button. The back has a USB 3.0 port, an ethernet jack, and both HDMI and what Acer calls a converter port. The converter port offers VGA connectivity via a $25 dongle. The V5 also features 802.11 a/b/g/n and Bluetooth 4.0+HS. The Webcam is a 720p model that delivers a smooth picture.
Acer ships the V5 with a fair amount of software on board. Some of it is welcome, including the company’s own recovery-management utility, a button to make up for Windows 8’s missing Start menu, Nero Backup Essentials, and Dolby Home Theater to perk up the sound. But you also get a lot of useless bloatware, such as links to Netflix and eBay. You’ll want to spend some time identifying and removing junk that might spawn unneeded background processes and sap the notebook’s performance.
The Acer V5-552G-X414 is a viable everyday laptop, and it’s more than viable when it comes to playing movies and low-resolution games. But the bendy feel of the touchpad continued to irk even after I’d had a few days to acclimate to it. And the inability to easily access the hard drive or memory stymies one of my usual suggestions for most users, which is to go cheap on the CPU and upgrade overall performance with an SSD (a component that’s not available as an option at the time of writing).