Apple was awarded a patent for a MacBook that would be powered with solar cells (photovoltaics), meaning your laptop could be powered or at least recharged through light.
The patent, titled “Electronic device display module” describes a two-sided display for the lid of a portable computer, such as Apple’s MacBook. The front of the lid facing the user would still sport the typical display screen but the rear would serve as more than just a cover.
The patent describes a rear plate made of “electrochromic glass” also known as “ smart glass” or “switchable glass.”
”Electrochromic glass, which is sometimes referred to as electrically switchable glass, may receive control signals (e.g., voltage control signals) from control circuitry,” the patent submission states. “The control signals can be used to place electrochromic glass in either a transparent (light-passing) state or a translucent (light-blocking) state.” 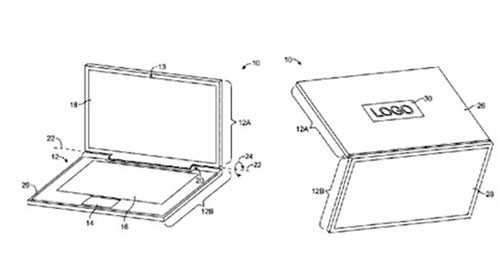 A sketch of the proposed laptop, which uses an electrochromic glass back panel that can be made opaque or translucent through a small electrical charge. The back panel would have solar cells embedded in it to collect power from light.
In the light-blocking state, the interior of the MacBook’s display would be hidden from the exterior view; the rear panel would appear opaque or translucent.
In the light-passing state, the rear panel would appear clear and allow images or other light output from status light-emitting diodes or other light sources, Apple stated.
The solar cells would be placed under the electrochromic glass layer on the rear plate.
”For example, photovoltaic cells may be interposed between a glass layer (rear plate) and liquid crystal display structures for display,” the patent states. Photo voltaic cells produce electricity when exposed to light.
When the laptop is near a light source, the light rays would pass through the electrochromic glass that forms the rear plate.
The solar cells would take in light as it passed through the glass, converting it into electrical power at a rate of 10 milliwatts or more.
Apple proposed that the solar cells would be capable of producing from 100 milliwatts to 1 watt “or even more” in order to charge the laptop’s battery or power the computer while it is in use.
The rear smart glass could also be used to display Apple’s logo by incorporating an additional light emitting diode layer as well as backlighting.
”To ensure that display is evenly illuminated, the back light unit that provides backlight for display… may be provided with light-emitting diodes that are arranged along more than one of the edges of the light guide layer in the back light unit,” Apple stated.

Is Microsoft rethinking its decision to build Office for iPad?

In appearances in September and October, Steve Ballmer said Microsoft would build native Office editions for iPads and Android tablets, but the company’s marketing chief spoke with much less certainty when asked about this on Thursday, February 13th.
At the Goldman Sachs Technology & Internet Conference, Marketing Executive Vice President Tami Reller was asked about Microsoft’s willingness to “repurpose” Office for other platforms, even if this means hurting Windows’ appeal.
Microsoft must make sure its most important brands are differentiated in the market, and Windows is no exception, Reller said .
“With Windows, we’re obviously spending a lot of time thinking about how do we continue to differentiate the full Windows experience,” she said.
A big asset for Windows continues to be Office, she said, adding that Office is also a major franchise in its own right.
Without directly answering the specific question posed by the moderator, Reller said those types of decisions will be made on a business-by-business and product-by-product basis.

The answer is a far cry from the unequivocal comments former CEO Ballmer made several months ago, when he went so far as to say that the Office version for iPads and Android tablets would come after Microsoft delivered a touch-first version for Windows 8.
Reller’s answer begs the question whether Microsoft is having second thoughts about its plan to port Office to those rival tablet devices and is back to hand-wringing mode over the dilemma of protecting Windows at the expense of liberating Office.
Many critics fault Microsoft for having taken so long to deliver a full version of Office for iPads, in particular.
Regarding Windows 8, Reller disclosed that the OS recently topped the 200 million license mark, a milestone she described as “stunning” while cautioning that Microsoft isn’t relaxing its efforts and focus on the OS.
“With Windows 8 we’re being very thoughtful about what’s going well and with what’s not going well, how do we change that?” she said.
The OS has “a lot of traction” but there is “yet a lot more work to do,” she added.
Expectations for Windows 8 were sky high when it shipped in October 2012, because Microsoft designed it with a touch-optimized interface intended to improve the OS’ anemic position in the tablet market.
However, that tile-based interface got very mixed reviews, especially from consumers and businesses that planned to use it primarily with keyboards and mice. Windows 8.1, an update released almost a year later, addressed many of those complaints but also came with a new set of bugs, some of them widespread and disruptive.
Right now, Microsoft is focused on making sure Windows offers an outstanding user experience across a broad variety of existing and future devices, from small tablets and smartphones all the way up to high-performance desktop PCs, Reller said.
Asked about the future of Windows RT—the Windows 8 version for devices running on ARM chips—Reller said Microsoft is happy with the way it’s working in its Surface 2 tablets. She also said Microsoft aims to have “a world-class mobile OS.”
There have been rumors in recent months that Microsoft plans to merge Windows RT and the Windows Phone OS, which today are separate products.

Intel has released a new tool for remotely managing servers from multiple hardware vendors, though it’s having to be careful not to upset partners as it looks to make more money from software.
Intel’s Virtual KVM Gateway is a software console that lets operators troubleshoot server and other hardware problems remotely, allowing them to check BIOS configurations, analyze server logs and in some cases restart systems.
Intel launched the Virtual KVM Gateway as an SDK (software development kit) last year, allowing partners such as Schneider Electric and Japan’s Niscom to bundle it with their DCIM (data center infrastructure management) suites. This week it started to sell the software as a standalone product on its website, priced at US$99 per server, said Jeff Klaus, general manager of Intel’s Data Center Solutions Group. There is also an option for a 30-day free trial.
KVM tools have traditionally been hardware switches that connect directly to servers (the KVM stands for the keyboard, video and mouse that plug into the switch). That approach creates extra cabling in the data center, though, and extra hardware boxes to manage.
So the market is moving toward virtual KVMs, or tools that provide remote management by tapping directly into server firmware instead of going through a switch, according to Klaus.
Most server makers offer their own KVM tools, so operators can end up having to switch back and forth between different consoles. One big benefit of Intel’s KVM is that it can be used to manage hardware from multiple vendors on a single screen, Klaus said.
Intel’s Virtual KVM allows operators to access up to 50 servers simultaneously, he said, making it easier to compare data from a group of servers. It can also access network and storage gear, or pretty much any equipment with a standard IPMI (Intelligent Platform Management Interface) port, he said.

The tool provides both in-band and out-of-band (OOB) access to servers, though OOB might be a challenge in some cases. OOB access involves skirting the server OS and communicating directly with the baseboard management controller, which allows access to servers when they’re offline.
However, server makers generally charge extra to enable OOB access to their systems, and the top-tier vendors—HP, Dell and IBM—only sell it as part of a bundle that includes their own KVM. So customers who want the benefits of Intel’s KVM might end up paying more if they need OOB access.
Klaus noted that second-tier OEMs such as Fujitsu and Lenovo tend to offer OOB access as an “a la carte option,” making it a smaller additional fee. And not all the top-tier OEMs’ customers buy their enterprise server management tools anyway, he said.
As Intel looks to sell more data center management products, it has to be careful not to cause friction with partners like Schneider that license its technologies. Intel intentionally priced its Virtual KVM Gateway so that it doesn’t undercut its partners’ offerings, Klaus said.
“It’s delicate, I won’t deny it,” he said.
Intel could face similar challenges in other areas besides KVM. It commands some 95 percent of the x86 server market, giving it access to a variety of instrumentation data including thermals and power consumption. It licenses access to that data to other companies that make data center management tools, particularly ones used to manage energy use.
“We think we’re in the best position, being the manufacturer of the hardware, to be that connected layer just on top of the hardware, and to provide that instrumentation data,” Klaus said.
A decision for Intel is whether it will continue to monetize the power and thermal data primarily through third parties, or whether it will use it to develop more software products of its own. The answer might depend on how well those third-party tools sell.
“Are we going to achieve the growth through partners, or are we going to have to pivot and be more direct?” Klaus said. “Right now, we’re putting more emphasis on partners on the power and thermals side, and we’re just trying this direct route on virtual KVM.”
How that strategy will evolve remains to be seen.