Audio manufacturer Denon Electronics announced at CES that its new line of HEOS wireless multi-room audio system will soon support Google Cast for Audio, allowing you to “cast” music, podcasts, and Internet radio from an Android smartphone or tablet to any of the wireless products in Denon’s HEOS ecosystem. 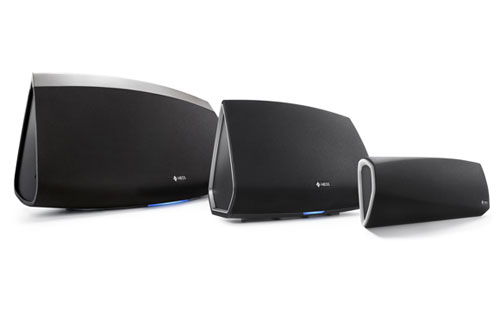 “Casting” is already a popular way to stream video from an Android device to larger display, such as a TV. Using a Wi-Fi connection, people can queue up their content fairly painlessly. Google’s audio-only version could become just as popular, especially if the capability comes integrated as it does in this case. The growing list of Google Cast Ready apps might provide an incentive to choose Casting over Bluetooth streaming as well.
“Based on the success of Chromecast, we’re excited to expand the Google Cast ecosystem by working with leading manufacturers like Denon to include audio devices,” said Suveer Kothari, Google Cast director of business development, in a press release.
There are three speakers in the HEOS line with increasingly large drivers and amplifiers for different applications: The $299 HEOS 3 is designed for small bedrooms and home offices, while the HEOS 5 ($399) can fill larger bedrooms or a small living room with sound. The largest speaker in the collection, the $599 HEOS 7, houses two tweeters, two midrange drivers, and a subwoofer, each of which is driven by a dedicated Class D amplifier. Denon says the HEOS 7 is powerful enough for very large rooms.
The impact on you: Google’s Chromecast technology has become tremendously popular for streaming Internet video to TVs, but you need to buy a dongle to pull off that trick. Denon’s HEOS speakers have the technology needed for streaming audio from an Android device built right in, so there’s nothing else you need to buy.
Does that make them a good deal? We’ll have to get one in to see how it sounds—and how it stands up against other multi-room audio systems, such as Sonos.
Source: www.pcworld,com