Repairs to the fabrication plant could take three to six months
The fire damage suffered by SK Hynix’s Wuxi, China DRAM fabrication (FAB) plant last week, along with the resulting power outage and clean room contamination, is expected to lead to a number of problems in the short term for DRAM supply, a new report finds.
Most acutely, the fire that blazed for almost two hours appears to have damaged equipment used for making PC DRAM, which has sent memory prices skyrocketing more than 27 percent over the past week.
DRAMeXchange, a research division of TrendForce, said the fire accident experienced by SK Hynix’s Wuxi Plant on Sept. 4 originated from its Chemical Vapor Deposition (CVD) machinery in the FAB’s clean room. Previously, Hynix had attributed the fire to equipment installation.
“Other than the severely burned equipment, the fire, heavy smoke and power shortages are known to have also contributed to the direct contamination of the clean room and the notably damaged wafer production lines,” DRAMeXchange wrote in its research report.
The fire may have damaged as many as 60,000 memory wafers, DRAMeXchange said.
Saving the fabrication plant from even greater damage, the report noted, was the fact that SK Hynix’s Wuxi Plant is based on a special “Gemini” architecture, one which enables the clean room and other important facilities to operate independently.
“Under such a design, even when a major accident hits an area, a plant would still be able to maintain at least 50 percent of its total production capacity,” the report stated. Other areas of the factory were affected by smoke damage, DRAMeXchange said.
“Sources with close knowledge of semiconductor equipment,” have indicated the recovery could take from three to as long as six months to complete, the report stated. 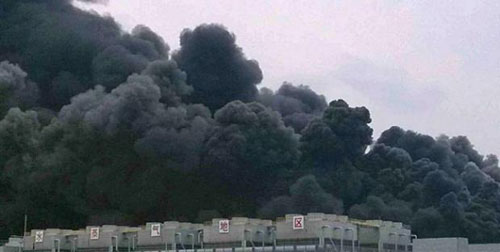 To facilitate the entire process, SK Hynix has sent up to hundreds of professionals and engineers to visit the accident site and to assess the situation more carefully, DRAMeXchange reported. “Once the damages to the Wuxi Plant have been clarified, the DRAM industry is projected to be in for a series of major challenges,” DRAMeXchange noted.
Some PC equipment manufacturers are seeking help from first tier module makers and Taiwanese DRAM manufacturers to ensure their future supply can be secured, the report said. A tightening of the DRAM inventory could happen as soon as Q4 of this year.
A longer lasting price surge in the DRAM market, additionally, could also become inevitable. “TrendForce believes Samsung and Micron will be the biggest beneficiaries of the current situation with SK Hynix, and that the growth and decline of the three major DRAM manufacturers will be considerably affected in the periods to come,” the report said.
With regards to bringing the undamaged portion of the plant back to full production, “it is taking some time for a thorough safety check by the Chinese fire & safety authorities and for the inspections of damaged equipment,” SK Hynix said in a statement. “However, we plan to complete inspections and full restoration of the air ventilation system and facilities in order to resume production in October.”
“Further, we will make every effort to ramp up operations in stages in order to fully recover normalized production level in November,” Hynix added.
Meanwhile, to minimize disruptions its DRAM supply, Hynix said it will increase its DRAM production in its Korean headquarters.