We’ve seen a number of budget Windows 8 laptops with last-generation Intel Sandy Bridge processors. This is not necessarily a bad thing, as Sandy Bridge chips are still competent and in our experience Windows 8 runs even more smoothly than Windows 7.

The Lenovo G580 has an Intel Core i3-2328M processor running at 2.2GHz, and it completed our multimedia benchmarks with a score of 37. This puts it just behind the similarly priced Asus K55VD in terms of everyday performance. It’s far behind a desktop PC and around 10 points shy of budget laptops with newer Ivy Bridge chips, but this is still enough power for web browsing, high-definition video playback and image editing, even if we don’t fancy your chances running multiple HD video streams in Sony Movie Studio. There’s also a useful 6GB of RAM; Windows 8 runs beautifully in 4GB, but the extra 2GB is a useful added extra to make sure you don’t get any slowdowns when multitasking or editing multiple high-resolution images at the same time. The laptop’s battery life fell quite short of our expectations, though, with only 4 hours and 37 minutes in our light-use battery life test. We like to see at least five hours of battery life, even from a budget laptop.
Unfortunately, the laptop didn’t perform half as well in games, but it’s very rare to see a portable PC with decent gaming performance at this price. The G580 uses the Intel HD Graphics 3000 chipset built into its processor, but this is not powerful enough to run modern titles. The laptop couldn’t run our Dirt Showdown benchmark at our laptop settings of 1,280×720, 4x anti-aliasing and High graphics detail, showing you’d have to turn detail levels down to sub-console levels to get any kind of smooth gameplay in modern titles. If your gaming veers more towards the casual than the hardcore, though, you can always have some fun with the Windows 8 Store’s 2D titles. 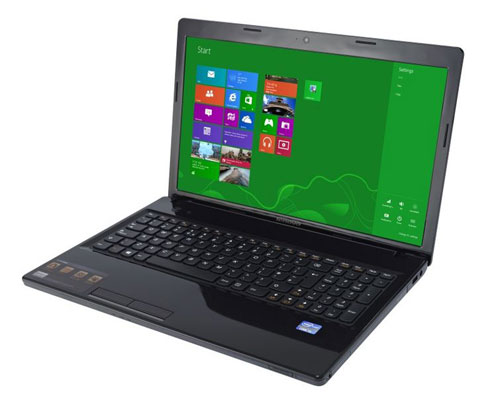 Typing on the G580 was very comfortable. The keys on its full-size Chiclet-style keyboard, where each key is separated from the one next to it rather than rammed up against it, are well-spaced and give plenty of tactile feedback, although the keyboard’s glossy plastic bezel and wrist pad certainly picked up their fair share of fingerprints.
The G580’s touchpad, however, is quite unusual. It’s made of the same textured material as the rest of the laptop’s wrist rest, and seems to blend into the chassis. It’s also very shallow, and we were worried this would make it easier to brush the touchpad accidentally. However, we didn’t have any problems with random cursor movement when typing.
That said, the increased friction of the touchpad’s textured surface did make using the cursor a bit more of an effort than we’d like, particularly when we were trying to make minor adjustments to open links or folders. We also found the touchpad button could be rather stiff, so overall navigating Windows and web pages took more effort than strictly necessary. On the other hand, we were impressed with the touchpad’s responsive multi-touch gesture support, which is particularly useful when navigating Windows 8, which supports pinch-to-zoom and various gestures to change applications and bring up the Charms bar.