Samsung is hoping to breathe new life into its phone lineup with a new design scheme that breaks away from the plastic, unsophisticated feel common among the company’s smartphones.
After many leaks and rumors Samsung announced the Galaxy Alpha Wednesday, calling it a “new design approach” for the company’s smartphones.
The Alpha is just below 7mm in thickness, runs Android 4.4.4, and is powered by an Exynos processor with four ARM Cortex-A15 cores running at 1.8GHz and four Cortex-A7 cores running at 1.3GHz. The screen is smaller than the current flagship Galaxy S5, measuring 4.7 inches with a resolution of 1280×720 resolution (a respectable 312 pixels per inch).
Other hardware specs include a 12-megapixel back camera and a 2.1-megapixel front-facing camera. The phone has 2GB of RAM and 32GB of internal storage, without the typical SD card slot found in many of Samsung’s other phones. The LTE modem supports download speeds up to 300 Mbps, although you’re not likely to get that kind of performance from your cellular carrier for awhile. 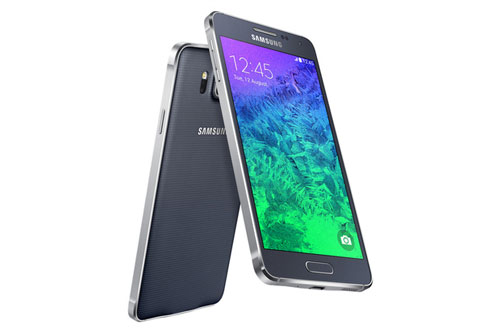 Given the device’s lighter build, smaller screen size and lower-range specs it appears targeted more at potential iPhone buyers than those comparison shopping an HTC One (M8) or LG G3, as those phones feature screen sizes above five inches and sturdier construction materials.
Despite the Alpha’s new design scheme, it retains much of the the look of previous Galaxy devices, with a semi-oval home button and dimpled, removable back cover. In its release Samsung says the phone will be available in four colors, which it calls Charcoal Black, Dazzling White, Sleek Silver, and Scuba Blue. Availability will vary depending on the market.
Samsung is not done releasing phones, as it next will unveil the Galaxy Note 4 on September 3. Greenbot will be on hand for the press event in New York.
The build of that device will indicate how far Samsung is willing to take its push for a new design. Earlier in August a Samsung executive sought to console nervous investors by promising more smartphone releases that had better build quality. The company experienced its first yearly profit drop and a large stock sell off by investors.
Samsung did not reveal a specific release date or price for the Galaxy Alpha, only saying the phone would be available in early September.