The Google Search 4.1 update added some cool new features to Google Now, but there’s a lot more lurking underneath the hood.
Android Police tore into the APK, finding evidence that Google has even bigger ambitions for its digital assistant. While there is no guarantee that any of the discoveries will make it into a future update, it provides a hint at how Google wants to bring even more of its machine learning prowess into Android.
Why this matters: Google Now is one of Android’s best features because it more deeply ties you to Google services, turning your phone into a more useful tool. It’s Android’s main trump card over iOS, putting key information right on your home screen, instead of keeping it locked away inside separate applications. 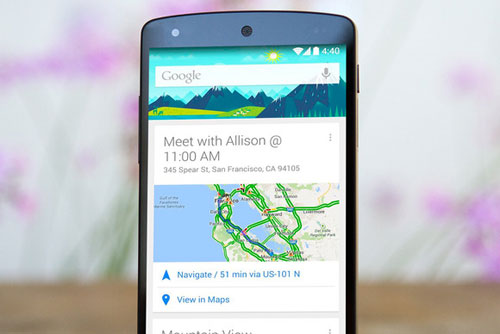 One interesting find is something called Project Hera. The best we know about it so far is that it’s part of Google’s continuing effort to more deeply tie together the web, Android, and Search. Think of it as the next step in Material Design, which has been used to bring a unified look across all of Google’s products (think how Inbox looks the same on mobile or the web). If Google can more deeply tie your search data, messages, and other info to interact between the web  and Android it makes the latter just that more powerful.
The code hints at more direct social network sharing capabilities. The icons are similar to those used on Google Glass, so all those news alerts, TV suggestions, and other cards that pop up could one day be quickly shared to your favorite network.
The lock screen also gets attention, with some kind of interaction for headsets, devices like Glass, or just more voice commands. You can already use the “Okay Google” command without unlocking the phone, but Google clearly has plans for building in more capabilities here. The code indicates that similar to how the Moto X reads aloud information, your phone may be able to read to you key notifications.
One feature that’s already in place is the way the Google Now Launcher will now hang around in the foreground when you’re interacting with certain apps. This could vary, of course, depending on your specific device’s user interface. But it’s a better visual cue for what task you were working on.
Another item I’m rooting for is the capability to copy text over from your browser to your phone. Pushbullet recently added a feature like this, but it would be great to have it as a native Android feature. The code Android Police found offers some good evidence, so let’s hope it shows up eventually.

No matter which of these pan out, you’re likely to see a lot more Google Now interaction in the future of Android. We’ll keep an eye out for such features should they ever materialize.