Samsung’s newest Gear VR is now up for preorder

For $100, you can secure the company’s latest take on a virtual reality headset.

Samsung’s improved, cheaper mobile VR headset is ready for the taking. Well, the ordering, anyway.
You can pre-order the new Gear VR directly from Best Buy for $99.99. Unlike the developer-oriented unit that Samsung let out into the wild last year, the new hardware works with the Galaxy S6, S6 Edge, S6 Edge+, and Note 5. 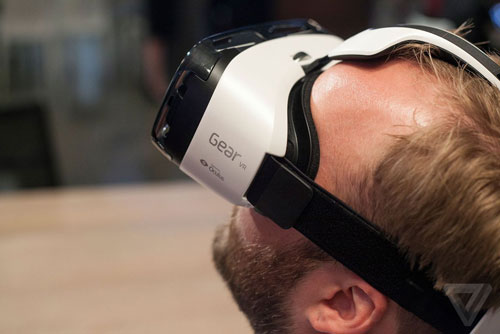 Samsung hasn’t indicated if it will work with future smartphones, as we’ll certainly see another round of Galaxy devices at some point in 2016. However, Samsung has promised a lot of content, such as a 16GB microSD card with “3D movie trailers and 360-degree videos.” Other support includes Netflix, Twitch, Vimeo, and Hulu streaming.
The Samsung Gear VR has a release date of November 20.
Why this matters: With such a low entry-point on price, the Gear VR is a pretty solid way to get your first taste of virtual reality. Of course, the budget price of the headset is offset by the $600+ phone you need to use it with. Of course if you want to go even cheaper, there’s Google Cardboard, which is compatible with practically any modern smartphone. There’s a lot of momentum around this technology. For example, YouTube recently announced you can reconfigure any video for VR.