Samsung is targeting the new memory at enterprise servers in next-generation data centers.
Samsung Electronics has started mass producing DDR4 memories that it expects will go into enterprise servers in next-generation data centers.
A successor to the DDR3 (Double Data Rate 3), DDR4 memories are expected to offer higher performance, reliability and lower power consumption than its predecessor.
However, there have been some doubts as to whether the market is ready to transition in volumes from DDR3 memories which are still being designed into servers and other products. Some analysts have forecast that the component will get designed into servers and later PCs only by 2015. 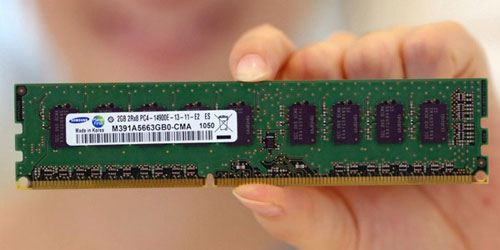 Samsung said on Thursday that early market availability of the 4-gigabit (Gb) DDR4 devices, which use 20-nanometer process technology, will create demand for 16GB and 32GB memory modules.
The 4Gb-based DDR4 has a data transmission rate of 2,667 megabits-per-second, a 1.25-fold increase over 20nm-class DDR3, while lowering power consumption by more than 30 percent, Samsung said.
Samsung did not immediately provide information on the schedule for shipment of the new memories. The pricing information is not available, a spokesman said.
Microelectronics standards body JEDEC Solid State Technology Association published in September 2012 the initial DDR4 standard.